When I repatriated to Lumaville from Oakland, I quickly acclimated to the abundance of street parking. Except on Sundays when the nearby Methodist Church has services, or if there’s a parade, or it’s the Rivertown Revival, or the farmer’s market, or some other bullshit that takes up the street parking in front of my overpriced flat… A few weeks ago, it was an estate sale.

After circling the block like a parking vulture, I realized the real vultures were those streaming into the house across street – the house those of us in the neighborhood refer to as “haunted” given its gothy architecture and the preponderance of decoy crows pinned to it (to ward off… other crows?). There are also the inexplicable champagne glasses wired in a permanent toast in a parapet above the front door.

Naturally, I assumed this meant that Freda, it’s octogenarian occupant, was dead.

Some dark part of me also thought that her little dog might have eaten her. It’s Lumaville, afterall. But it didn’t, as I later confirmed.

After driving past my pad several times, I finally sandwiched the Mini between a pair of moving van’s parked near the deceased woman’s house.

Sidewalk signs beckoned me into the estate sale. I knew I wasn’t going to give up my grudge without at least a walk-thru.

The interior decor was, to coin a phrase, “My Own Private Versailles.” 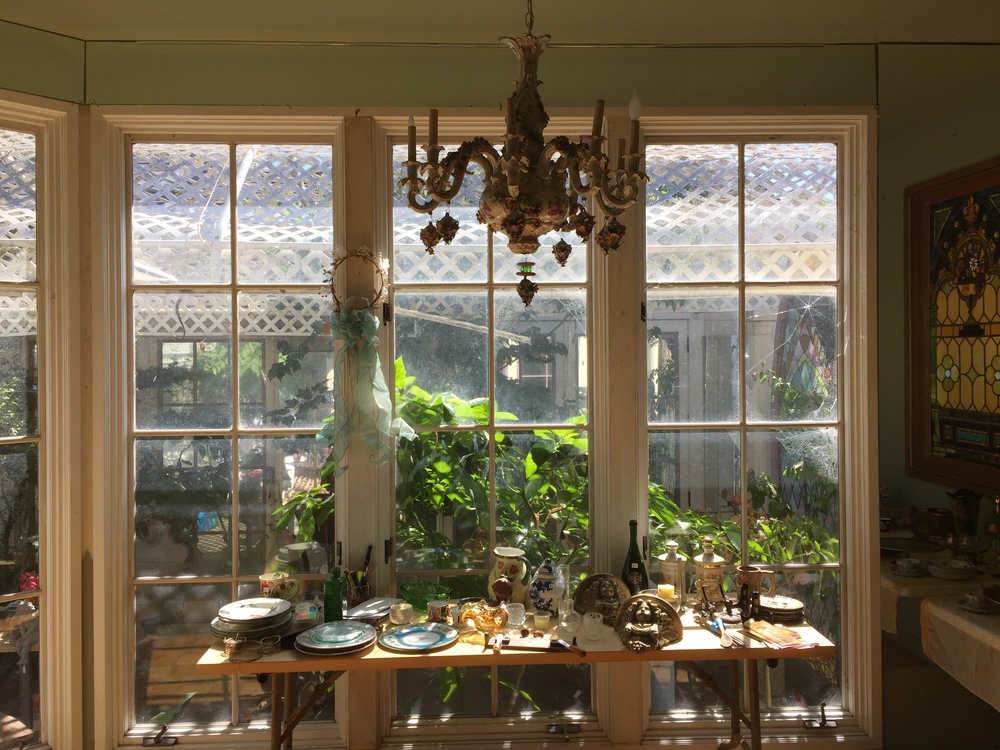 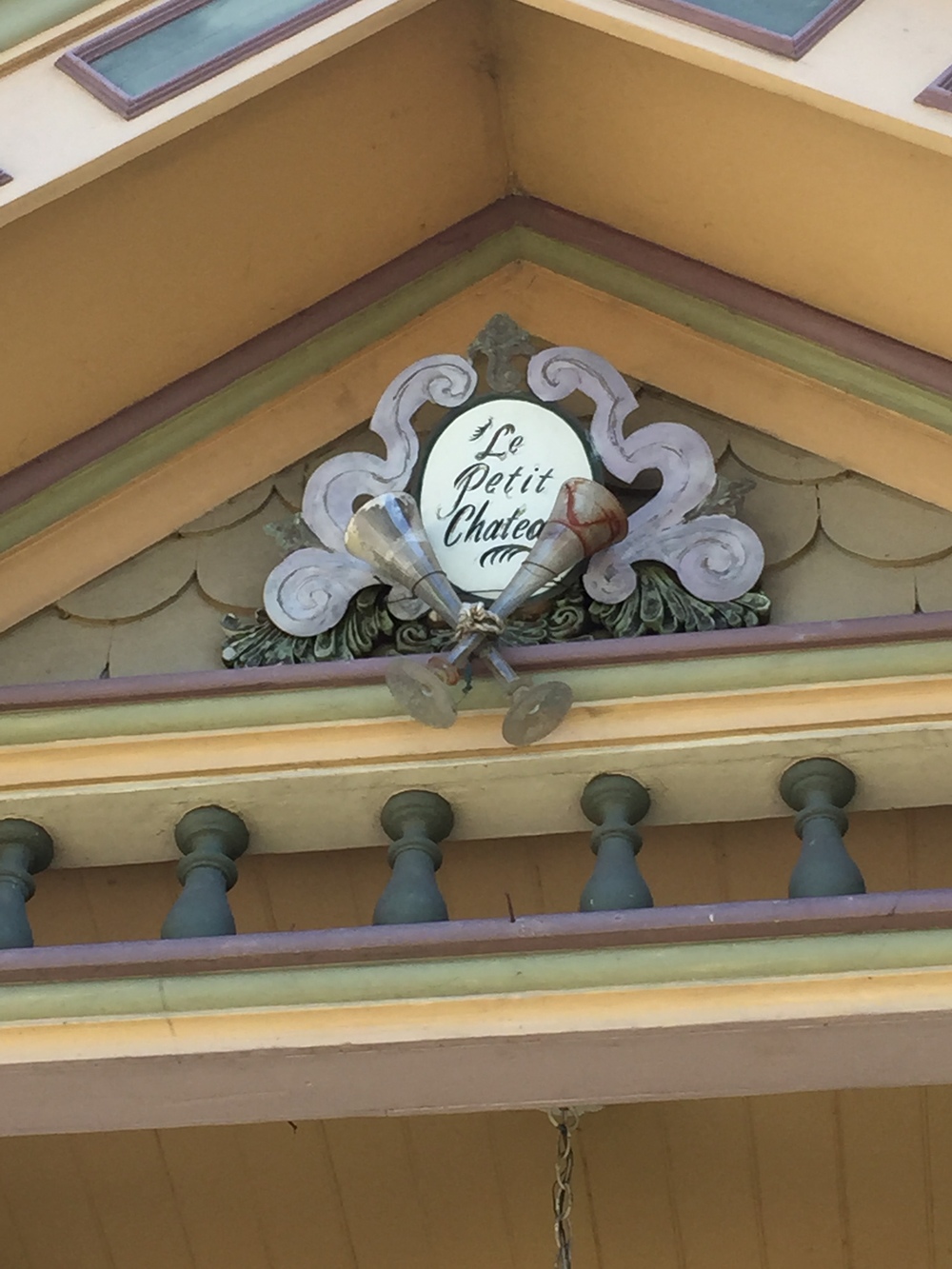 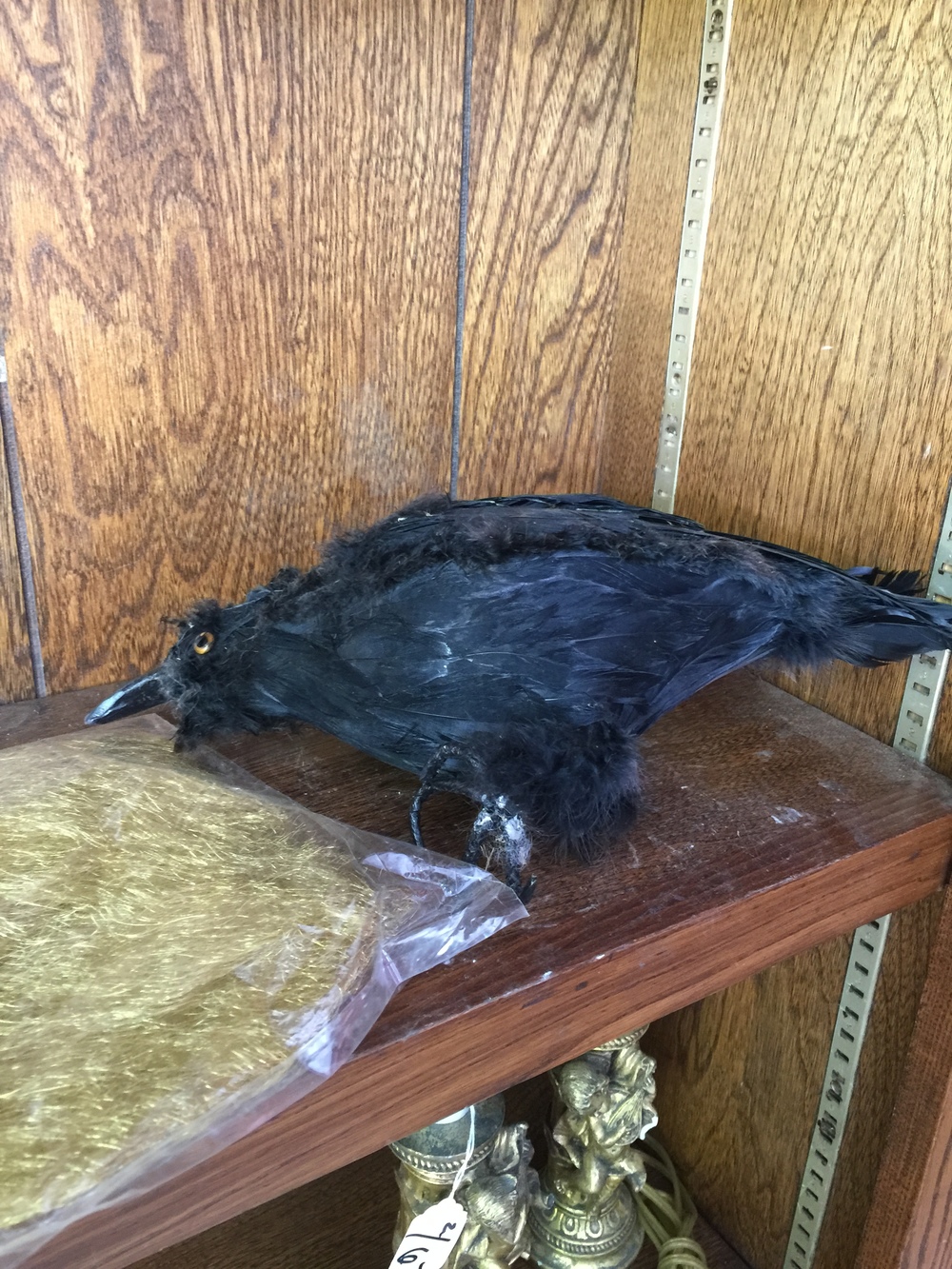 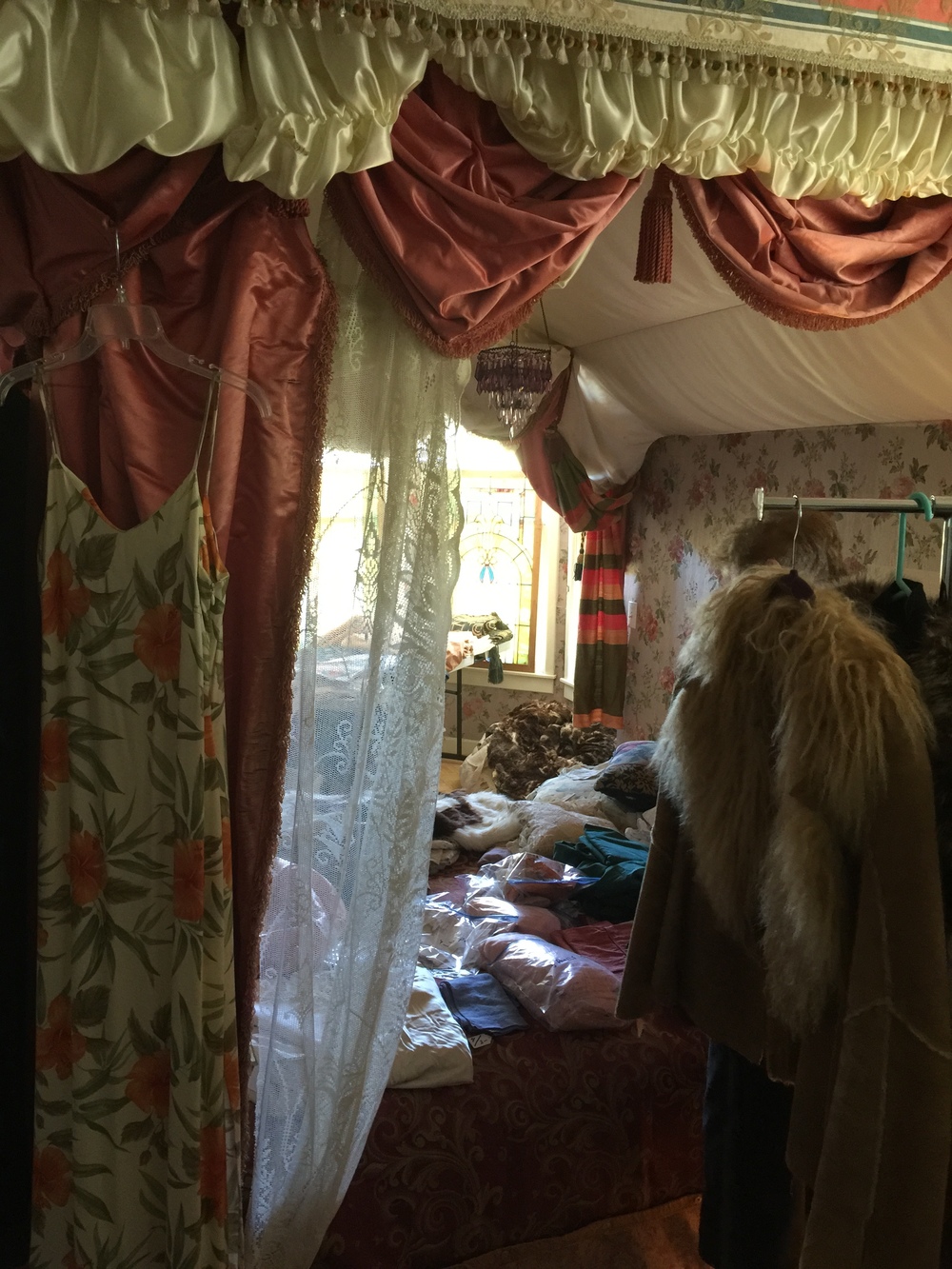 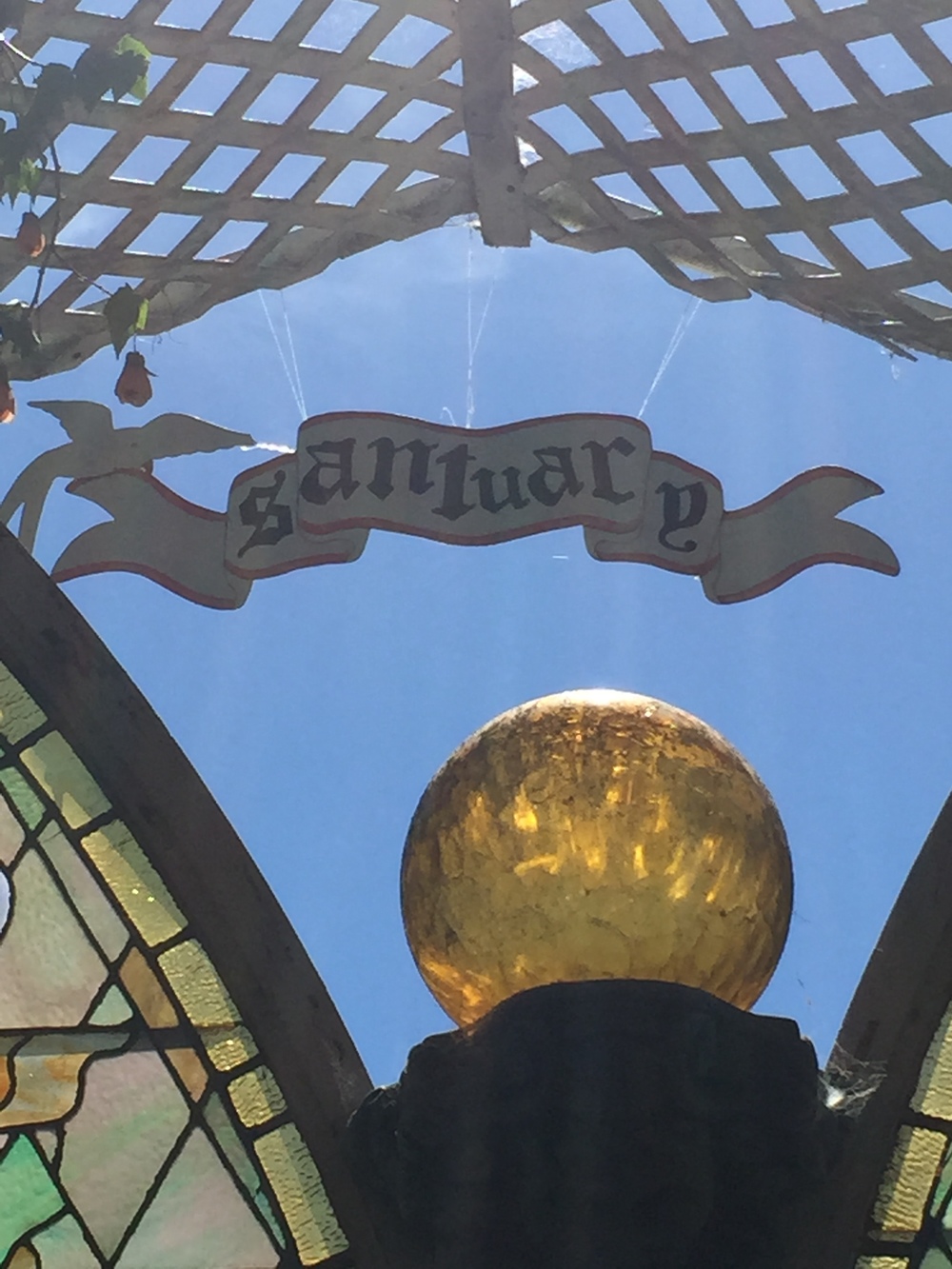 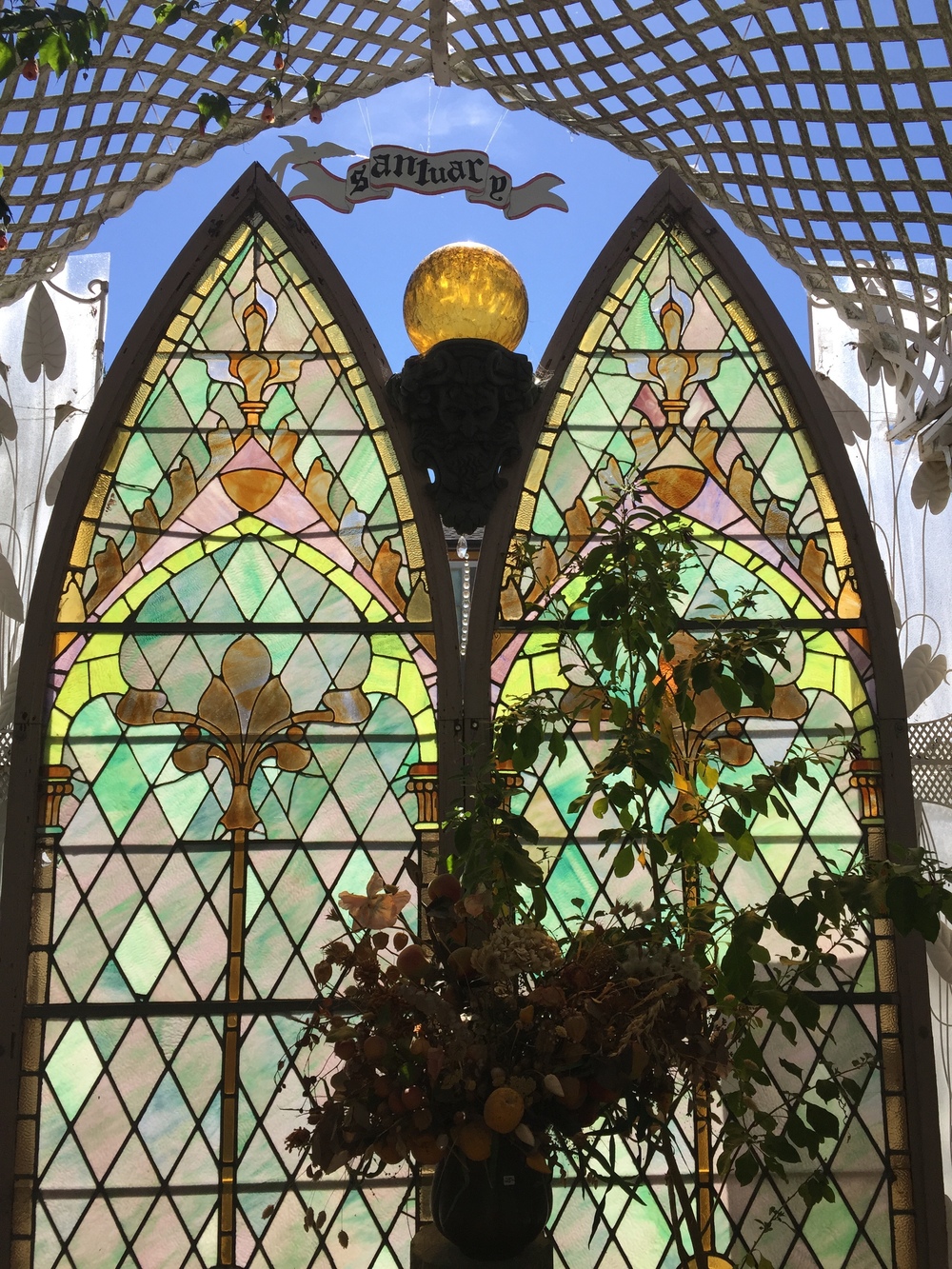 I took photos because I knew you wouldn’t believe me and I haven’t the interior design vocabulary to describe my neighbor’s unique and personal aesthetic. And, yes, I admit taking photos at an estate sale might be an act of poor taste (though I was not the only one — it was so damn fascinating). Hence, karma obligated me to purchase something.

I bought a vintage game of Sorry (my putative apology), a live David Bowie album, a small tripod, a kite and some twinkly Christmas lights intended for my gazebo. The old lady would be happy, I thought, but then realized, what does she care? Freda’s is just another word for nothing left to lose…

Throughout the experience, the adage, You Can’t Take it With You came to mind. It’s also the title of a play I performed in high school, the theme of which set my course for what we might call an “aspirational minimalism.”

Sometimes, I’ll think about those people in the design blogs who have reduced the objects in their lives to a mere 100 and my chest tightens as I consider crush of possessions I still own and the realization that I’m a real person and actually need them all.

When I was suddenly single in my late 20s I went to Crate and Barrel to replace the kitchenware that went with the ex. I picked a single plate, bowl, silverware setting and proceeded to the checkout only to be chided by a shopping companion for thinking too much like a solo act. Now, living alone again, I have enough place settings to host a moderately-sized dinner party. Which is to say I just have a lot of dirty dishes.

At the estate sale, I inquired after the decedent and was told that she was alive and well in San Francisco and the sale was in part helping to pay for her care.

She was alive? I felt played. Like an old Bowie record.

Then I felt relieved. I wasn’t a vulture after all. And the old lady was alive to boot. And there would be a smidge more parking on the block. And… Well, in the month it’s taken me to file these thoughts, a man in a pink blazer and a Napoleon hat hosted some sort of party at the vacant house (which is now for sale) and, ironically, there was no place to park. Also, sadly, predictably, Freda died. I learned this from someone who read it on Facebook – because, you know, that’s how we roll these days. Perhaps I’ll get a little dog and train it to eat me when I die so I’ll finally get some clickbait mojo on Facebook.

In the meantime, in tribute to my erstwhile neighbor, here’s “Here Today Gone Tomorrow,” a track on David Bowie Live at the Tower Philadelphia, which I now own thanks to Freda.