For several weeks, the background picture on my laptop screen has been set to an image of a desolate, crumbling brick building. It’s the rear view of an edifice in Pt. Reyes Station that’s either aesthetically dilapidated or an eyesore, depending on how well one slept in art class.
Frankly, its seismic retrofitting would be best done with dynamite, though a misdirected sneeze could probably achieve the same. On the side that faces the village’s main drag, fliers cover it like barnacles on a sunken boat. The handbills for charity spaghetti feeds, dances and a dude who will convert your vinyl records to digital files, are probably what’s keeping the wall from collapsing. The rear wall already has and what’s left is subject of the photo on my screen.

It’s not a great image. Annie Leibovitz need not fear for her day job. I shot it on a whim with an iPhone while my wife and kid patiently waited out another one of “Dad’s art-guy moments.” When these moments come, they’re fast and furious. My imagination ignites and I’ll have a sudden compulsion to – as in this case –stage some sort of Julie Taymor-esque take on Shakespeare in the place. Perhaps a lesser-known work, a “problem play” like “Troilus and Cressida,” mounted in modern dress and over-the-top beatnik theatrics, set atop the mounds of detritus and dirt. However, once the image was absorbed into my “camera roll,” the need to stage Shakespeare in the Park(ing lot) faded “like the marigold, that goes to bed wi’ the sun.” And we could go on with our day.

Lately, the image has remained a window into the imagination for me – a way to wick away the workaday woes and project my mind into a new space. I’m easily drawn into its dimensionality, the way De Chirico’s Piazza d’Italia, or the lauded one-point perspective in certain Kubrick flicks, create a hypnotic tug. Or perhaps fixing my eyes on a laptop a few feet afield is easier on the eyes when staring into space, since I’m farsighted. 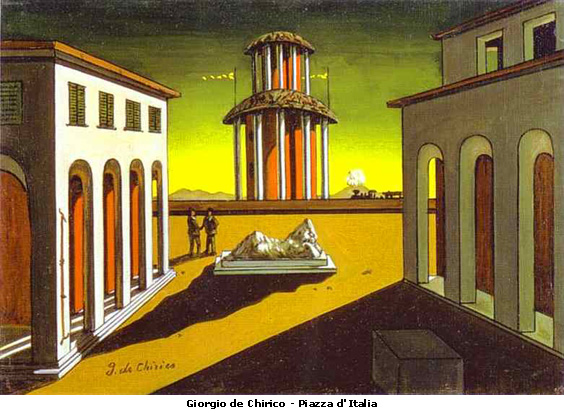 My day job entails oodles of laptop-based presentations about “saving the media,” so I’ll frequently change the background image from fascinating decrepitude to stock shots of “victory.” The images prime my audience psychologically – or at least that’s what some business blog has led me to think. A recent favorite is Muhammed Ali standing over Sonny Liston, his elbow crooked in a “V” ready to backhand Liston should he dare rise. Sometimes, I get overly literal and call up the movie poster for Victory, the early ’80s soccer flick starring Michael Cain, Rambo and Pelé. Afterward, I change it back to the old building.

You see, when you look at something for weeks, you become familiar with details that only seem to emerge with time. It’s like those Magic Eye pattern pictures of the ’90s, but without the headache.

The first week, I noticed the words “Peanut Butter,” written in faded spray paint on a doorway that had been filled with concrete. As a graffiti tag, it’s interesting in several ways – not least of which for its length, since most taggers have honed their signatures into speedy, single squirt graphemes, to evade authorities and turf rivals. Not so in Point Reyes. It could be weeks before the county sheriff rolls by. Peanut Butter could’ve finished spray-painting his novel by then. Though that too would begin to fade.

Later, I noticed to the center left is a brilliant burst of magenta, which appears to be the flowers on some bright weed that bloomed sometime between my viewings.

Today, I finally became aware of the pigeon presiding over the whole affair, perched atop the far wall, near the center, flanked by a pair of silver stove pipes.

Permit me to anthropomorphize a moment: The pigeon is looking down in a kingly pose, like some crime boss proud of the wrack and ruin beneath his feet. A valley of debris that was once engineering, architecture and human labor, overtaken by the nature of which he is still part. This dirty dove, this black bird of death, peers down his beak at me and says, “Nature will always prevail.” Cue the theme of Hitchcock’s The Birds.

Clearly, this photograph has supplanted more traditional navel-gazing for me, which is just as well since I can scarcely see the bottom of my navel and may well lose my mind in the abyss. Today, I’ll probably camouflage my desktop with the Thrilla in Manilla, take a victory lap and call it day. But later, the pic of Ali pummeling Joe Frazier in a spray of spit and sweat will be replaced by the architectural Armageddon on Highway 1. Like a postcard from the future, the latter frames a herky-jerky time-lapse movie of human endeavor, and reminds that the now is better than the then when it comes to leaving our marks. Just ask Peanut Butter.