As an armchair Jungian, one of my factory-default-settings is a heightened sensitivity to synchronicity – the perception that separate phenomena may share some shared significance but without “any discernible causal connection.” Think of it as pattern-recognition-plus or being bisociatively-curious.

Connecting the dots in this manner might be an earmark of  genius or paranoia, depending which side of the meds one wakes up on. I’m neither a genius or paranoid, nor, for the record, a paranoid genius, but no matter how disparate or faint the stars, I can usually make out (or make up) a constellation.

I’m presently trying to wrestle some meaning out of the following folly, which has absorbed several precious hours this weekend:

Years ago, Trane DeVore snapped a photo of me with my hands through a large film reel as if I was locked in stocks like a 17th century ne’er-do-well. After some Jurassic-era Photoshopping (this was the early 90s), the result became the de facto logo for SCAM Magazine and other of my early enterprises. When packing for a recent move, I unearthed an original print of the image and, for safe-keeping, stowed it in a handy copy of Dylan Thomas’s Adventures in the Skin Trade until I could file it in my Smithsonian Box. 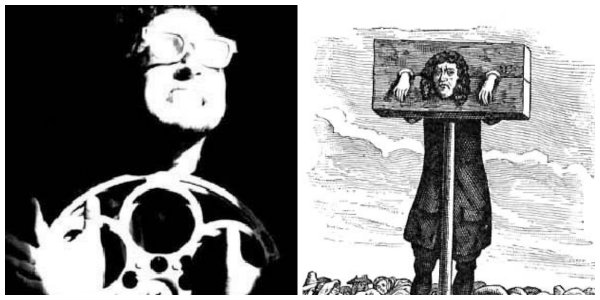 I forgot about this sentimental souvenir until a couple weeks ago when reading a quote from Debbie Millman’s Brand Thinking (via Brainpickings) that traced the origin of branding and trademarks to the “Trade Mark Registration Act” passed in the UK circa 1876. The first “brand” to receive official trademark status was Bass Ale for “its now-quintessential red triangle…” 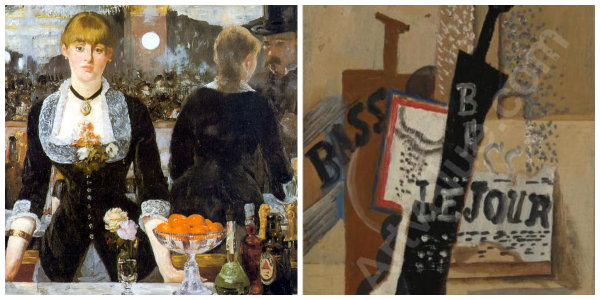 Millman went on to cite Bass Ale cameos in Manet’s 1882 painting A Bar at the Folies-Bergèreand 40 odd works by Picasso (all with “Bouteille de Bass” in their titles) as milestones in “product placement.” My interest piqued, further research yielded an appearance of Bass in Chapter 14 of James Joyce’s Ulysses, the so-called “Oxen of the Sun” chapter in which Leopold Bloom contemplates the logo:

During the past four minutes or thereabouts he had been staring hard at a certain amount of number one Bass bottled by Messrs Bass and Co at Burton-on-Trent which happened to be situated amongst a lot of others right opposite to where he was and which was certainly calculated to attract anyone’s remark on account of its scarlet appearance.

This is where the synchronicity kicks in for me. Naturally, after our move I couldn’t find the aforementioned Thomas title behind which I slipped the seedling of my own nascent efforts in branding. My wife, incidentally a woman whose career is in brands, found it instantly and sure enough, on the cover is depicted a comic scene in which a man’s little finger is stuck in a bottle of Bass & Company Pale Ale (a nod to the protagonist of the title story who suffers the same fate). 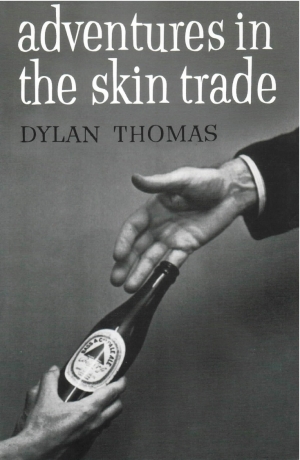 This discovery provided me an occasion to wonder what all this Bass-branding might portend and more broadly, branding in general and my relationship to it. And is this synchronicity – how one semi-loaded notion seemed to spill into another like so much pale ale? Sure, if you’re drinking from a Klein bottle. And speaking of Bass, should I have another? Or should I just drink less – period? Should I be wary of red triangles? Avoiding Red Square has seemed sensible enough at times, but where’s Red Triangle? Turns out, according to Wikipedia, I live near it:

The Red Triangle is the colloquial name of a roughly triangle-shaped region off the coast of northern California, extending from Bodega Bay, north of San Francisco, out slightly beyond the Farallon Islands, and down to the Big Sur region… Around thirty-eight percent of recorded great white shark attacks on humans in the United States have occurred within the Red Triangle…

I’m not worried about shark attacks or getting my finger stuck in a bottle or having some kind of existential Joycean moment whilst propping up a bar (a hazard when you’re a drinker named Daedalus). I do fear missing meaning when its revealing itself to me, nearly as much as I fear I’ve simply going mad. I can’t help, however, wanting to believe the universe provides such signs and symbols as an invitation to better understand it and perhaps ourselves within it.

Perhaps when there’s no “discernible causal connection” we have to make one, lest we live in a universe that produces only an elegant chaos that is little more than a light show. If, as they say, we are made of stardust, then mapping meaning in the phantom constellations between us is a worthy endeavor – whether one finds the Summer Triangle as in tonight’s stars or, like Manet, Picasso, Joyce and Dylan Thomas before me, a trademarked trivium of bloody angles.