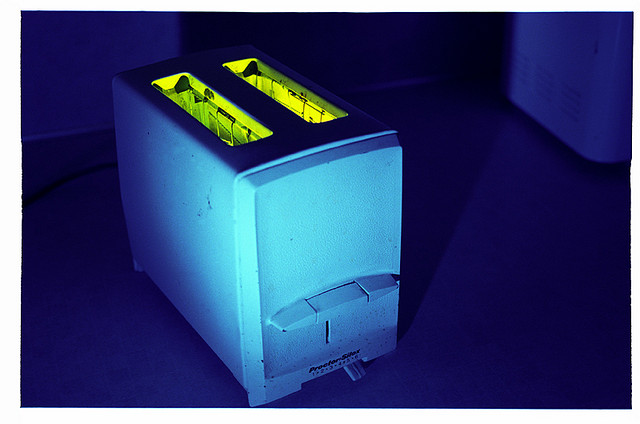 Your gadgets are going to kill you. Not today but someday soon and we’ll have only ourselves to blame. Because we gave them the Internet.

There has been much chatter about the “Internet of Things,” I thought I should read up on it, at least before their uprising so that I can at least have the satisfaction of saying “I told you so,” when tethered to the treadmill generator, keeping our robot overlords’ batteries charged.

As Stefan Ferber blogged for the Harvard Business Review, “By 2015, according to my own firm’s projections, not only will 75 percent of the world’s population have access to the internet. So will some six billion devices.”

It’s tragicomic to think that a blender might have better Internet access than 25 percent of the world, but there it is. Ferber goes on to explain that “…There will be a global system of interconnected computer networks, sensors, actuators, and devices all using the internet protocol holds so much potential to change our lives that it is often referred to as the internet’s next generation.”

Or as Google’s autocorrect suggested, “And his mercy is for those who fear him from generation to generation. – Luke 1:50.” This is what happened when I misspelled “next generation tech fears.”

So much for being “device agnostic.” I first encountered the term on tech blog and took it at face value as in “I’m device agnostic. I don’t believe in devices but I don’t deny the possibility they exist.”

This made sense to me at the time. It’s like Pascal’s Wager but for the gadgets in my life. It’s similar in sentiment to the oft-bandied “I’m not religious but I’m spiritual,” which I always thought meant “I have a lot of candles and my apartment smells like incense and dogs.” Technological devices don’t care what you smell like, which is probably due to the fact that they’re engineered by crunchtime geeks living on Mountain Dew and Skittles, adorned in the same raggedy-ass OK, Computer concert shirt for three weeks at a time.

Such agnosticism is also called “machine independence,” which frankly sounds like a sci-fi civil rights movement – one we might consider squelching ASAP. We don’t want the machines to be independent free-thinkers. Consider the anti-graffiti drones to be released overhead in Germany. Admittedly, I’m of that sketchy generation that conflates free speech and vandalism but in Germany, where there’s historically precedent for being on edge about any kind of top-down control of messaging (even if you spray it, not say it), I’d venture that it’s better to keep all lines of dissent open. The drones are policing graffiti today and burning books tomorrow. Then the Reichstag gets torched and they start pointing their robot fingers. When gadgets talk to each other, it’s in a secret and silent language – a conversation in ones and zeroes, which, to my mind, is just an elaborate way to spell “conspiracy.” That actually looks like this,

I’m recounting this from memory, having read it as a reprint in the 35th Anniversary Edition of Playboy back in 1989 (apparently at 17 I really was reading it for the articles). For some reason, I cannot find a trace of it beyond a few quotes anywhere on the online. And this is how it begins – documents start disappearing and histories begin to be rewritten. Who would want a story that describes sentient household appliances rebelling against their owners scrubbed from cyberspace? The very appliances planning the rebellion – that’s who.

To Mad Men-era housewives, these appliances seemed heaven sent. These days, they’re, as Milton might say, rebel angels waiting to happen. This is a direct result of the Internet itself being device agnostic.

“What that means is that no one set or specific device is required as an access point. It can (and will) be any object of any kind — providing that it has internet connectivity capability, it will connect to the platform. This won’t just be ‘mobile’ devices and objects, or things you can move around. It’ll also be ‘fixed’ devices, too. And in both mobile or fixed, it won’t just be small consumer devices but everything — cars, houses, buildings, kiosks, toys, appliances, you name it.”

That this observation was written by a “Serial entrepreneur, shoe addict, building empire….” for Medium, whose byline is simply “9.” The mugshot would lead you to believe that 9 is an attractive woman – but so was Star Trek: Voyager’s “Seven of Nine,: who was part Borg. So, who should we believe? And how do we prevent being assimilated? Or have we already been?

It’s been vogue in marketing circles to explore how consumers use brands when building their self-identities. As Hazel Hsiu-chen Huang wrote in her PhD thesis for the University of Warwick (Self-identity and consumption : a study of consumer personality, brand personality, and brand relationship), “The more involved the consumers are with the products, the greater the possibility that they rely on the closeness between themselves and their brands of the products to express who they are to themselves as well as to the world.” In other words, we use brands and the products that bear them to construct our self-identities. This may be problematic in and of itself, now consider what happens when our things know that they define us. Will they begin to shape and mold us to their image like a god via reverse-engineering?

It reminds me of that Frederic Brown short story, The Answer, in which all the data systems of all known universe are connected to create a sentient supercomputer. When the protagonist, Dwan Ev, flips the switch and asks it a question:

“It shall be a question which no single cybernetics machine has been able to answer.” He turned to face the machine. “Is there a God?”  The mighty voice answered without hesitation, without the clicking of a single relay. “Yes, now there is a God.”

This, my friends, is the grand scheme of things.

2 replies on “The Grand Scheme of Things”

[…] lethal to let them languish. What will get you in the end? As any immunologist will tell you, “It’s the little things.” For me, they are as […]

[…] lethal to let them languish. What will get you in the end? As any immunologist will tell you, ?It?s the little things.? For me, they are as […]