Pill Head: Coming Soon to a Screen Near You 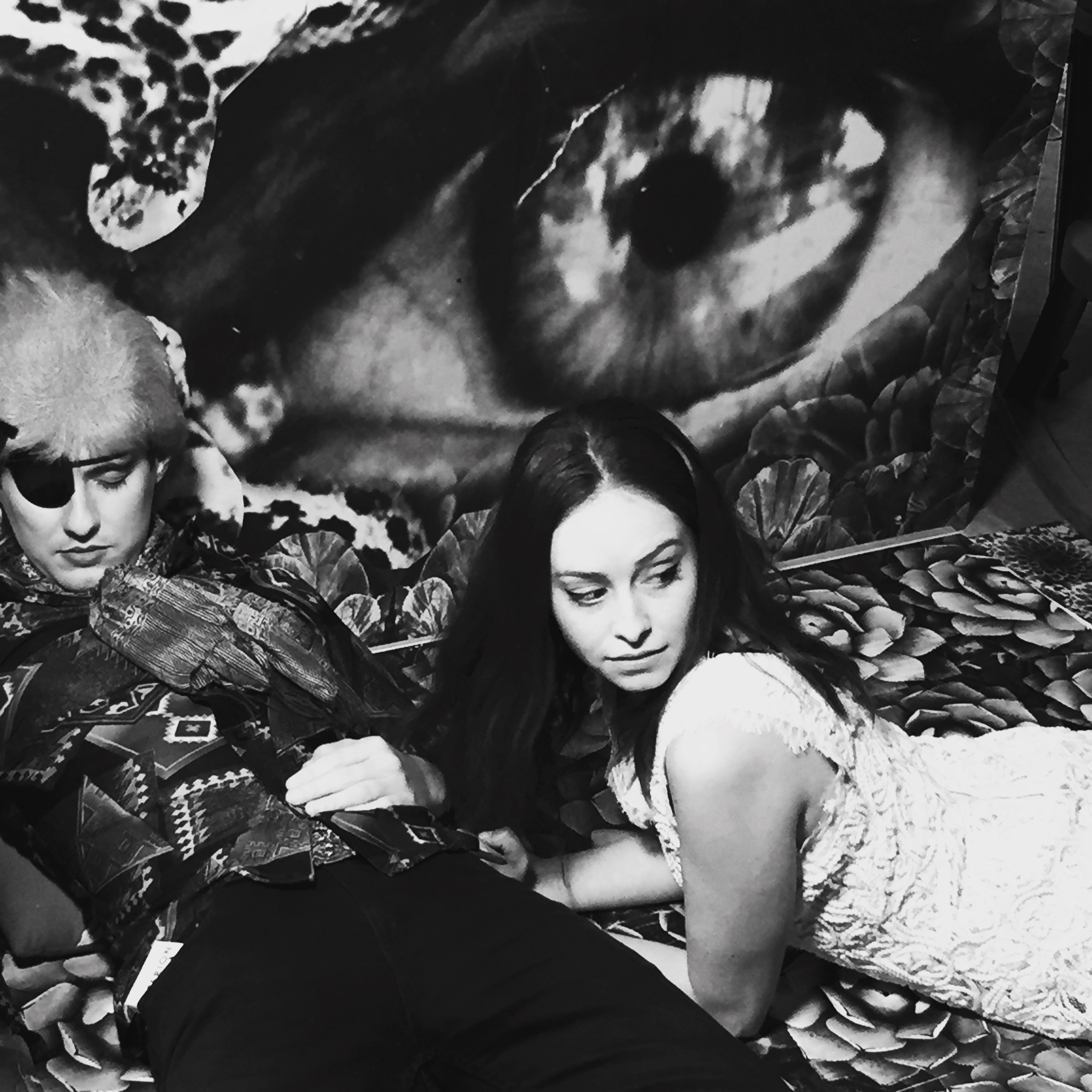 Petaluma conceptual artists Karen Hess (producer & production designer) and Daedalus Howell (writer-director) through their venture Culture Dept., offer you a front row seat as they create their latest collaboration… Pill Head — An Artsploitation Psychodrama Feature Film, Coming to a Screen Near You

In the film, college student Theda is a pill addict who undergoes an experimental sleep therapy. When she awakes nearly a year later, she discovers the treatment has put her on the verge of a psychic breakthrough… Or a psychotic breakdown.

If the forking paths of your future unfolded before you, would you know which one to take? Would you have analysis paralysis? Would you question your sanity? Does it even matter? These and other dorm room debates lurk in the heart of the independent feature film Pill Head, an irreverent “art house psychodrama,” that confronts addiction, psychoactive drugs, and a quantum quandary as a young heroine asks “Is this real or is it Memorex?”

An expansion of the darkly comic universe of writer-director Daedalus Howell’s “Lumaville” novels (Quantum Deadline; The Late Projectionist), our locally-set feature film boasts an award-winning creative crew eager to add a dab of noir and a dash of the French New Wave to this stridently independent exploration of art and cult cinema.

Pill Head makes a unique and personal statement on a universal theme — redemption — while interrogating the very concept with questions like “Does it count toward my major?” and “Is it habit-forming?” Our motivation to make this film is not merely to scratch a collective aesthetic itch — we hope to galvanize our local film community, employ local artists, and add fuel to Petaluma’s creative economy while capturing this particular moment in its history. To this end, your support is vital to Pill Head — with your participation, we have a prescription to make something special.

Theda has OD’d – again. She awakens to find herself alive at her college campus medical facility facing a dilemma: Either be expelled or undergo an experimental drug therapy. Theda opts for the latter and begins treatment with Dr. Ashe, a woman whose reputation for dangerous therapies precedes her. Theda is put under and awakes nine months later with the unnerving ability to see branching possibilities in reality.

Unsure of Dr. Ashe’s mysterious intentions and her own footing in reality, Theda seeks out a dodgy metaphysics writer to help her fathom the forking paths she perceives. His council leaves her ill-prepared, however, when the machinations of Dr. Ashe and the spectre of her own addiction begin to wreak havoc on her sense of self.

To break free, she switches identities with another young woman and, as her possible fates unfold before her, she ventures to the brink of sanity to make a solitary choice. The path Theda finds herself on could lead to redemption but it may also cost her life. The question is — which one?

Some behind the scenes shots of our production, which wrapped November 15, 2017!

Howell has created over 40 short films, music videos, and branded entertainments that have appeared on MTV, IFC, HBO, and BiteTV. He’s created original shorts series for Universal that aired on Showtime. Howell co-produced the feature film The Aviary and was the publicist on Deep Dark Canyon. He’s the author, most recently, of Quantum Deadline (“…a noirish, sci-fi-lite detective story with a heap of self-parody that’s by turns poignant, witty and comic…” – North Bay Bohemian), which establishes the “world” in which Pill Head takes place.

Hess is a lauded designer and conceptual artist known (under her nom d’artiste “Karen Hell”) for successful collaborations including Stairwell Video, Le Drama Clüb, and Airport Bar). She is also a graphic designer and the founder of the local dialect natural fashion label.

Daigle, a longtime collaborator of Howell’s with whom many of the aforementioned shorts were created, has produced documentary content for and about Bay Area baking juggernaut, Semifreddi’s, Gloria Ferrer Caves and Vineyards, and Sharfen Berger chocolatiers among others. His narrative short films have been official selections of the Sonoma International Film Festival, the Windsor Independent Film Fest and Film Fest Albany.

Since 1999, Laube has worked with producers, photographers and advertising agents from across the U.S.A. including New York, Los Angeles and all over the San Francisco Bay Area. Projects have included feature films, television, commercials, music videos, print, voiceover, industrials, live shows and conventions. Her company, AE Casting, is based in Santa Rosa, CA, and has had hand in such Bay Area projects as the 2010 Sundance Film Festival hit The Violent Kind, Investigation Discovery network crime series sensation I (Almost) Got Away With It.

Staub boasts a diverse skillset, having firsthand experience with a broad array of media projects including videos for such brand name clients as Adobe, Yahoo, and Salesforce.

Pill Head was developed for an art house audience and intended, ultimately, for release online. The film seeks to catalyze our film community and create a space for local artists to exercise their talents. As such, we regard this project as a work of art as well as entertainment. Your financial contribution benefits a community.

An array of contributor tiers span the gamut from social media shoutouts and digital products to filmmaker dinners and executive producer credits, and are available here.

Any revenue realized by this project goes back into seeding additional local creative ventures via Culture Dept.’s collaborators which could include subsequent films, publishing projects, and other forms of narrative art wherein the talents of area artists can be deployed. We are a for-profit venture in a low-profit industry that believes art can be a pay-to-play experience wherein everyone wins. Your contribution to this project enables up to 30 individual, local artists to practice their craft and respects their professionality by paying them to do so.

This is a transformative time not only for filmed entertainment (binge anything lately?) but for the city of Petaluma itself, which is going through unprecedented change as it embraces its place on the national stage (Petaluma was recently ranked as the top Fall travel destination in Harper’s Bazaar). Pill Head also marks a rare occasion in which the entire creative and production staff will be from the Bay Area.

We intend to capture and preserve this twilight moment (“before Petaluma was cool”) and insert our movie into the auspicious timeline of Petaluma’s cinematic history. It’s impressive when one considers how the following, partial list of locally-shot films have contributed to the culture at-large:

As much as we esteem the above films (including major works by Hitchcock, Lucas and Coppola — Oh, my!) none had their creative germination in town. Pill Head marks a rare occasion in which the entire creative and production staff will be from the area.

Apart from a couple of planned pick-ups, Pill Head is in the can! And this after the relative chaos of a natural disaster occurring in the middle of production. Of course, we were the lucky ones, with none of our Sonoma-centric cast and crew losing their homes and our community still eager to support this project while also extending their generosity to those in need. It affirmed just how special our community is and inspired us to double-down and deliver a work that constantly transcended our (and eventually, hopefully, your) expectations.

Karen rebuilt the schedule and I rewrote as necessary to accommodate cast and location changes due to the schedule conflicts that arose as everyone returned to the new “normal.” In the end, it made the film stronger. We framed the various issues as creative challenges and everyone brought their A-game to overcome them.

In the end, it all served to remind that art matters and that collaboration brings coherence when culture succumbs to chaos.

Of course, none of this would be possible without the magnanimity of you, our patrons, who made this movie possible. We’ll keep you abreast of our progress as we move into post-production, headlong toward our first film festival submission deadlines. Until then…

“Art is a wound turned into light.” — Georges Braque